Role-Based Access Control (RBAC) provides control over the level of access for different users. Different parts of the Hyperglance application can be enabled or disabled, users can be given read-only or read-write access and individual accounts & subscriptions can be shown or hidden from display in the Hyperglance diagram.


Regardless of how you administer your users we use the same set of role-based permissions to grant users access to various functions and/or to restrict access to parts of the diagram.

There are two kinds of role in Hyperglance: "system" roles and "fine-grained topology access" roles.

Exactly 'how' you assign roles to users depends on whether you are using the built-in user scripts or the SAML based authentication.


Examples of role assignments for different kinds of user:

Note: All non-admin users will require either the HyperglanceRole_ViewAllTopo role, or, one of the "fine-grained topology-access roles" (see below). Otherwise they will not see anything when they login.


Fine-Grained Topology-Access roles give users access to different parts of the overall diagram on a per account/subscription basis.

You can assign as many fine-grained topology-access roles to a single user as you need.

Note: Admin users never require topology-access roles as they can see everything anyway.


The fine-grained topology-Access roles correspond with the "Account Alias" which is setup when adding accounts/subscriptions for Hyperglance to monitor: 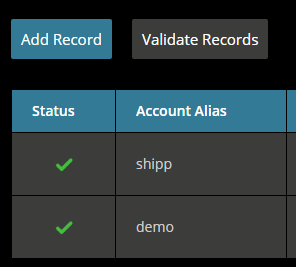 These account aliases can also be found in the top-left of the screen after you click on any entity in the diagram, for example here is an Amazon resource belonging to the "demo" account:

To grant users access to topology from this 'demo' account you need to assign a correspondingly-named role:


If you had multiple 'demo' accounts across datasources, such as a demo account in AWS and a demo subscription in Azure then you might want to use a more specific version of the role:

The syntax here is simply this:  {DatasourceName}::{AccountAlias}